If you have an older Laser 3000, check under the gunwale where the chain plates are bolted through. The earliest boats
had a load-spreading plate that was barely longer than the bolt spacing, and this has pulled though the deck on several
boats causing great damage. Laser recognised the problem after a year or so and fitted subsequent boats with a longer
load-spreader wherein the plate extends well beyond the holes.

If your boat has had problems in the past you may want even longer load spreaders. These can be supplied by  Vandercraft.

Here's a modified arrangement put together by Martin Weißer.  As you'll see, he's put somewhat larger, thicker, aluminium (an easily worked metal) plates beneath the existing short plates.  To avoid any crack-inducing, point loadings on the grp, he's added a thin rubber pad beneath the aluminium, although well-rounding the edges of the aluminium plates would already be a big improvement on the original plates.

If the main shrouds on a Laser 3000 are the originals, you might be well-advised to replace them with new, as the originals tend to break at the talurit sleeve below the spreader.

1. Purchase can be increased by adding further blocks. 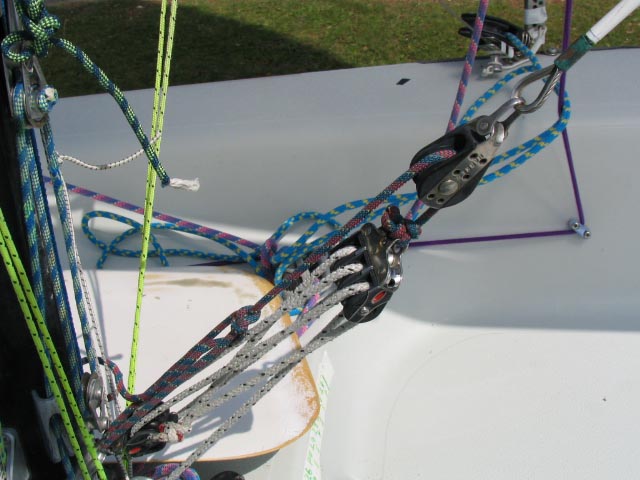 2. The tail of the kicker can be led to a block fixed, e.g. tied, to the centre-mainsheet turret. 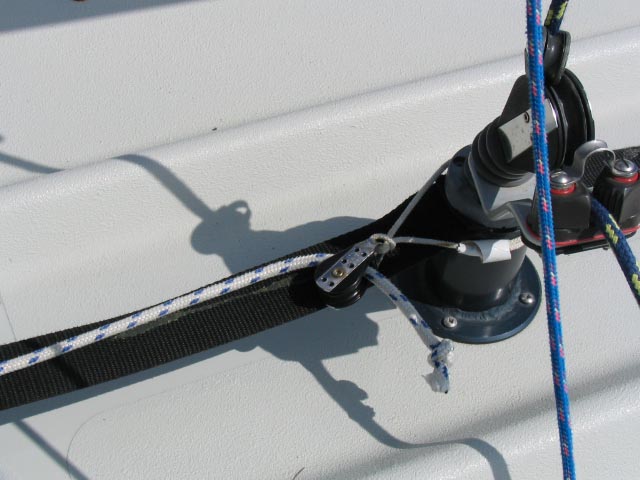 3. For the ultimate upgrade, which gives much more space in the boat, the kicking strap can be replaced by a gnav, obtainable from VanderCraft. This necessitates raising the attachment point of the lower shrouds on the mast, using a bracket (supplied) 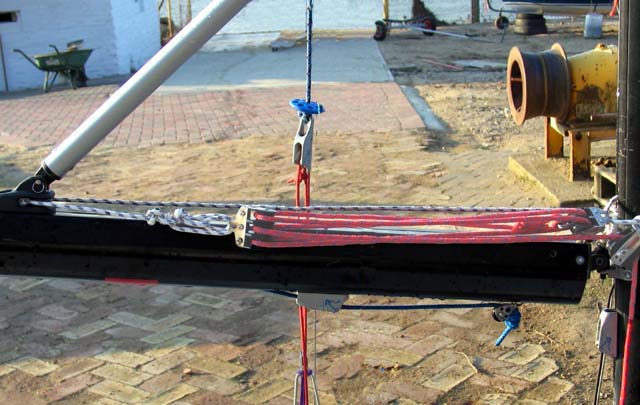 The first thing to do with a Laser 3000 is to unbolt the cleat from the swivel and remove all the packing pieces - they raise the cleat too high, meaning it can be difficult to un-cleat, especially if you are sat out.  Before you replace the cleat, ask yourself if you really need it.  The author sailed with mainsheet cleats for years and thought he was their total master - until he removed the cleat and found he capsized half as often, for various reasons down to the cleat.  If you plan to try main-cleat-less sailing, however, you will need to reduce the mainsheet loads; read on:

1. Many helmsmen find the sheet loads rather high (and exhibit a corresponding reluctance to take the sheet out of the cleat and play the main up-wind); this is especially likely if the crew is heavier than the helm. The quickest and easiest modification to a Laser 3000 mainsheet is to convert it from 4:1 to 5:1. Probably the best way to do this is by adding a further block on a mini-bridle tied to the existing centre bridle, and dead-ending the mainsheet on the boom, thus:

Note that in the photo, the aft-most block on the boom has been replaced by a ratchet block enabling the cleat and its associated block to be removed and mainsheet to be held directly from the boom - this lightens the mainsheet load still further, as well as giving very direct control. The centre bridle still represents an obstruction to the helm's very necessary move forward in the boat in light airs, however, so that the next refinement is to move the bridle to the stern of the boat as set out below:

2. Aft bridle: the bridle supporting the lower mainsheet blocks can be moved  to the stern of the boat, which not only gives more space in the cockpit but also usefully reduces mainsheet loads (equivalent to a 5:1 with centre bridle). This necessitates drilling a hole in each gunwale, 30cm forward of the transom and 1 to 2cm in from the gunwale edge to take the ends of the bridle. One of the blocks is slid back to the end of the boom and the mainsheet rigged to provide a 2:1 purchase at that point. A ‘catcher’, which may be just a rope loop,  is needed on the boom midway between the boom blocks to stop the mainsheet lassoeing the helmsman’s head!
3. Adopting an aft bridle brings the further option of using ‘off-the-boom’ sheeting. This involves moving the ratchet block up onto the boom in place of the block midway along it, and (preferably) removing the mainsheet jammer from the boat, replacing it by plates (e.g. of plastics by Holt Allen) to retain the toe straps. The mainsheet is then handled directly from the boom, which has the benefits of giving still more space in the cockpit and further-reduced mainsheet loads, as well as a more direct feel and more favourable sheeting angle for the mainsheet, pulling the boom in rather than down, the latter force being supplied by the kicking strap.

These are available from VanderCraft, and are slightly larger. Small adaptations are needed to use them on the Laser 3000.
1. The North jib (available optionally in Mylar or Dacron) is attached to the boat’s bow (not the original furler) by means of a rope strop (e.g. 5mm Dyneema) through the bow eye normally used to receive the forestay. To obtain sufficient rig tension and ensure the correct sheeting angle, the shrouds should be much shortened (move the pins lower on the adjusters) to rake the mast aft, and/or a shorter jib hallliard (e.g. 4.08 metres) fitted.

Photo shows relative sizes of North Mylar and Hyde jibs, the bow eye used on V3000s, and the solution for rigging North jibs on Laser 3000s of running a tack strop through the bow eye down to a shackle on the painter fitting.

2. The North spinnaker has a longer luff, so that the upper spinnaker halyard block on the mast has to be moved higher up - the centre of the eye should be 0.85m below the top of the mast tube proper (excluding the sheave cage). A new longer halyard (14.5-15m of 4mm polyester) is then required. The foot of the North spinnaker is, however, shorter than that of the Hyde, and is best set on a 150mm shorter pole, which besides allowing the sail to set correctly, gives a better balanced boat on reaches. The pole can effectively be shortened by tying a limiter line between the mast step and the inboard end of the pole, to prevent the pole moving the last 150mm forwards.

3. The mainsail foot is longer, so that the tack needs to be tied as close as possible to the mast. According to the class rules, any arrangement of blocks may be used to increase purchase on the Cunningham (downhaul).

* See especially the Technical and Class Development sections of the web forum.